Paper presented at the annual meetings of the American Society of Ethnohistory, Lawrence, Kansas, September 7-10, 2022. This presentation was based on SSAI Working Paper 2021-02. Paper PDF.

The Identification of American Indians in the Federal Decennial Censuses

Paper presented at the annual meetings of the American Society of Ethnohistory, Lawrence, Kansas, September 7-10, 2022. This presentation was based on SSAI Working Paper 2021-02. Paper PDF.

The displays in this section focus on five important schools attended by the Little Traverse Bay Bands of Odawa Indians (LTBB) living in Waganakising—the Land of the Crooked Tree—located in the counties of Emmet and Charlevoix in the northwest portion of the lower peninsula of Michigan. The first three displays provide a series of photographs for three of the boarding schools attended by LTBB students: Holy Childhood of Jesus Indian Boarding School operated by the Catholic Church in Harbor Springs, Michigan; the Mount Pleasant Indian School operated by the Bureau of Indian Affairs (BIA) in Mount Pleasant, Michigan; and the Carlisle Indian School operated by the BIA in Carlisle, Pennsylvania.

A Partial Documentation of U.S Government Subsidized Schools Serving Anishinaabe Students from 1823 through 1848

In this display I document schools designed to serve Anishinaabe students from 1823 through 1848, as reported in the records of the Bureau of Indian Affairs. The Anishinaabek are a group of culturally related Native Americans made up of the Three Fires Confederation of the Odawa (Ottawa), Ojibwe (Chippewa), and Potawatomi. The Anishinaabek have historically been located in the Great Lakes region of Canada and the United States.

Although I have covered the entire period, I have only investigated and reported the years 1823, 1830, 1836, 1842, 1845, and 1848. For this reason, my list of schools for the entire period must be considered to be a partial one as I missed schools that would have existed for only short periods between the examined years. But, for the years covered, the list accurately reflects the schools reported by the BIA.

The schools included in my display were compiled by examination of an Alice Fletcher volume and the annual BIA reports for the respective years, including the summary tables and the text 2. I heavily skimmed the text of the BIA reports for all years and read any section mentioning any of the Three Fires of the Anishinaabek, schools in Michigan and surrounding states, and other sections that seemed relevant, such as reports recording tribes moving to Indian Country and any schools set up there that would have impacted Anishinaabe populations. I likely missed some schools relevant to the Anishinaabek, but believe the time spent skimming and reading would have made the undercount of those reported by the BIA slim. Of course, as noted above, I have missed all schools not included in the BIA records.

It should be emphasized that compiling the list of schools was made difficult by the fact that the BIA reports from which the data were drawn were sometimes ambiguous, and the same schools were likely listed with different names in different years. In addition, there were possible errors in the BIA reports—for example the listing in 1836 of two schools serving Ottawa and Chippewa students in New York.

Two schools listed in 1823 merit special mention in this overview. One is school number 35, which is listed by the BIA as serving the Wyandots at Upper Sandusky, Ohio, with no mention of Anishinaabe students. A second is school number 37, which is listed as being “Fort Wayne, Indiana and Michigan”, again with no mention of Anishinaabe students. Since there were Anishinaabek living relatively close to the Wyandots and to Fort Wayne for many years, some of them may have attended the two schools. I have included them in this compilation.

A note on the maps themselves: due to the nature of the language describing school locations being vague (usually consisting only of a town name) and the mapping software requiring an exact coordinate to pin a point, the pins of the map are approximate and should not be overly zoomed in on.

Anishinaabe Schools in Existence by Year 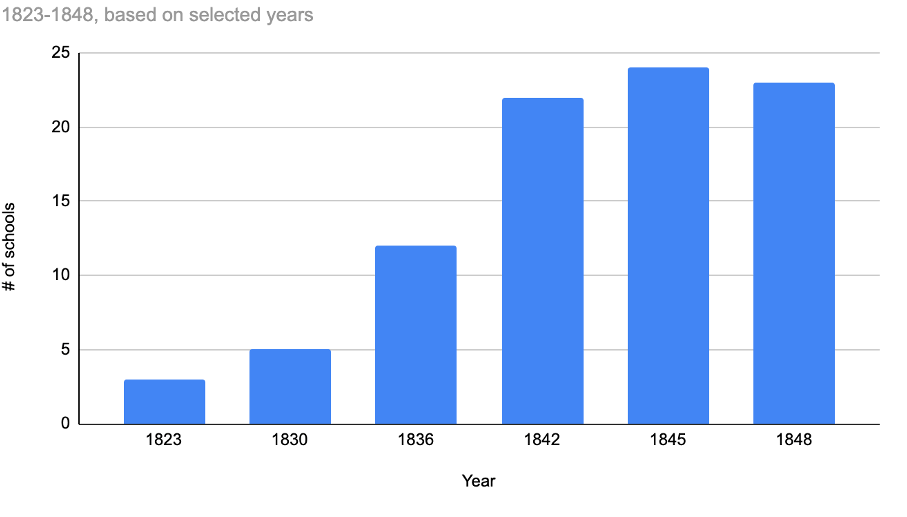 1 This project was supported by the Population Studies Center, Department of Sociology, the College of Literature, Science, and the Arts, and the Office of Research at the University of Michigan

2 I have compiled the lists from the relevant issues of the Annual Report of the Commissioner of Indian Affairs and from an 1888 manuscript by Alice C. Fletcher: Indian Education and Civilization: A Report Prepared in Answer to Senate Resolution of February 25, 1885. Washington: Government Printing Office.

Native Americans of the Upper Great Lakes: Sociological and Historical Perspectives on Land and Schooling Among the Anishinaabek

In this presentation a team of researchers from the University of Michigan and the Little Traverse Bay Bands of Odawa Indians Archive and Records Department discuss the land and schooling of the Anishinaabek—the Three Fires of the Odawa, Ojibwe, and Potawatomi. Of particular focus is the spread of Euro-American schooling among the Anishinaabek from the early 1800s through 1950. We trace the establishment of schools in the early 1800s and the growth of literacy and school attainment from the 1850s through 1940. In addition to considering schooling levels and trends of the Anishinaabek at the national level, we examine state differences, and focus on one particular group, the Little Traverse Bay Bands of Odawa Indians, who today live in Waganakising—the Land of the Crooked Tree—located in the northwest portion of the lower peninsula of Michigan.

Paper presented at the annual meetings of the Social Science History Association, Philadelphica, November 11-14, 2021. This presentation was based on SSAI Working Paper 2021-04. Paper PDF.

What Can We Learn about the Colville Reservation Indians from the United States Censuses?