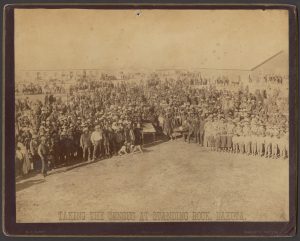 Sociological Studies of American Indians has an open viewpoint concerning appropriate data and methodologies. At the same time, we are innovating in the use of historical sources of quantitative data for the study of Native social patterns and trends. More specifically, we are making extensive use of data from the decennial censuses conducted by the Census Bureau between 1900 and 1940, the censuses conducted by the Bureau of Indian Affairs between 1885 and 1940, and annual reports of schools and students prepared between 1819 and 1938 by the Bureau of Indian Affairs. We are documenting the nature of these data resources, discussing their strengths and weaknesses, and describing some of their potential usefulness. We are also documenting the distribution of Native populations across states and counties and making methodological innovations to create tribal geography areas to be used as proxies for tribal identity when direct information about tribe is not available. We are also relying heavily on birth cohort analysis to study trends in American Indian life.

Abstract
This project examines the federal decennial censuses as sources of information for studying the social and demographic attributes and changes in attributes of American Indians. We have three main purposes: first, to describe briefly the history of the decennial census program, with particular focus on the treatment of American Indians in that program; second, to consider the structure and content of the 1900-1940 decennial censuses, particularly as they relate to American Indians; and third, to provide discussion of the quality of the 1900-1940 census data collections. We conclude that the 1900-1940 decennial censuses provide an especially substantial body of information to study American Indian individuals, their society, and social change over a substantial and important period of time—the first four decades of the 20th century. Of particular value is the fact that the data are available in microdata files from IPUMS for both samples and complete-counts of the American Indian population, permitting extensive individual-level analyses. At the same time, we recognize that all data sources including censuses contain errors and present opportunities for misinterpretation. Given the issues that we discuss, such opportunities for error may be greater in using the 1900-1940 censuses for American Indians than the average research undertaking. Nevertheless, we are optimistic that if these data are analyzed and interpreted with great care, they provide many opportunities for increasing knowledge of American Indians, their society, and social change over these decades. 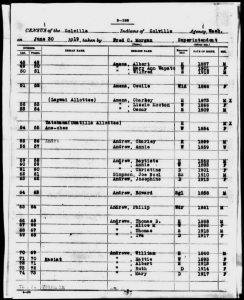 Project 1.02: The Identification of American Indians in the 1900-1940 Federal Decennial Censuses

Abstract
In this project we examine the ways in which the federal decennial censuses have defined and identified who is an American Indian—and how those definitions have influenced the number of people identified as Native in the 1900-1940 censuses. Census documents indicate that during this period census enumerators were responsible for recording a person’s race, with very few instructions about how to do this. Using materials generated from and about the 1900-1940 censuses, we conclude that the definitions and procedures resulted in many people who descended from residents of what is now the United States in the year 1491 not being enumerated as American Indian in these censuses. This occurred because many people with such Native ancestry were either not enumerated or were recorded as being of a non-Native race—with this being particularly common among those who were the most assimilated into Euro-American society. Materials from the 1960-2010 censuses provide evidence consistent with this conclusion. Many people in the 1960-2010 era who identified themselves as American Indian would not have been so identified using the methodology of the 1900-1940 era. Similarly, many people who said they had Native ancestry in the latter period were not recorded as being of American Indian race in those censuses, and this was a likely occurrence in the former period as well. These observations suggest that those people enumerated in the 1900-1940 censuses and recorded as American Indian would have been weighted towards those most closely associated with Native communities—including American Indian reservations. The 1900-1940 censuses would also have included people as American Indian who were generally assimilated into Euro-American society but who had physical attributes signaling Native heritage to the enumerators—or had sufficient Native identity to signal that to the enumerators. It is likely that such selectivities would have been experienced fairly similarly across the 1900-1940 years.

Abstract
The Records of the Bureau of Indian Affairs 1793-1989, (Record Group 75), has long provided researchers the opportunity to examine the U.S. government’s efforts to assimilate American Indians into Euro-American culture during the late 19th and early-mid 20th centuries.  Current internet technology easily provides access to an important data source within Record Group 75 known as “The Indian Census Rolls, 1885-1940.”  This data source has enormous potential for researchers as it is perhaps the only annually collected individual and family level data pertaining to American Indians alive during this time period. Yet before embarking on such projects, researchers should first attempt to gain an understanding of the underlying methodologies that produced the resulting American Indian Census Roll data.  Currently available publications have tended, and understandably so, to overgeneralize the protocol as well as many of the implementation issues faced by the data collection project during its more than half-century of existence. The BIA provided a great deal of instruction to the BIA agents expected to produce the completed forms using a variety of methods i.e., circulars and directives, question by question instructions that appeared in memos or on the back of the census form, and instructions printed on the front of the form.  I examine how these individual sources as well as relationships between them may have influenced the resulting census data itself.  Such investigations are important for helping to interpret the information recorded on the censuses, and currently much of that methodology has not yet been digitized for internet use.

Abstract
This project has two broad and interrelated goals: to investigate the geographical distribution of the Anishinaabe people in the U. S. in 1930 using the U.S. decennial census; and to create and evaluate a method for investigating the attributes of the Anishinaabe people in the U.S. using the 1900-1940 decennial censuses. There were many Anishinaabek living in Canada in 1930, but our use of the U.S. census data means that we cannot represent Canadian Anishinaabek in any way. We show that in 1930 there were Anishinaabek living in nearly half of the states of the U.S., but in most states the numbers of resident Anishinaabek were quite small, reaching 1000 people in only five states—Michigan, Wisconsin, Minnesota, North Dakota, and Montana. Another three states had 100 or more Anishinaabe residents in 1930—Kansas, South Dakota, and Oklahoma. The great majority of Anishinaabek in the U.S. 1930 census were located in counties in the Great Lakes Region or west of the Great Lakes along or near the Canadian border. In the early 1900s the Anishinaabek in the U.S. also tended to be located together in counties primarily occupied by other Anishinaabek and with few people from other tribes. This makes it possible to use this geographical information to serve as a proxy for Anishinaabe tribal identification. We identified a substantial number of U. S. counties whose Native populations were primarily Anishinaabe or were located geographically close to such Anishinaabe counties and did not have any non-Anishinaabe Native residents reported. We propose that residence in one of these counties can be used as an indirect indicator that the Native people living there were indeed Anishinaabe and can be analyzed as such. By identifying such counties as primarily Anishinaabe counties, we can use residence in a county designated as Anishinaabe as a proxy for being Anishinaabe when direct tribal information is not available. Our empirical investigation of results using this approach suggests that these results are likely to be robust in producing quite reliable estimates for Anishinaabek in the U.S.