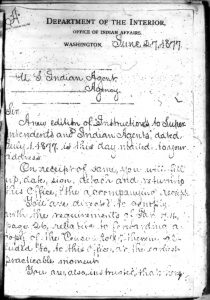 Linda Young-DeMarco. “A Review of the Bureau of Indian Affairs Annual Census Program and its Protocols as a Source of Information about American Indians, 1885-1940.” SSAI Working Paper 2021-03. March 2021.

The Records of the Bureau of Indian Affairs 1793-1989, (Record Group 75), has long provided researchers the opportunity to examine the U.S. government’s efforts to assimilate American Indians into Euro-American culture during the late 19th and early-mid 20th centuries. Current internet technology easily provides access to an important data source within Record Group 75 known as “The Indian Census Rolls, 1885-1940.” This data source has enormous potential for researchers as it is perhaps the only annually collected individual and family level data pertaining to American Indians alive during this time period. Yet before embarking on such projects, researchers should first attempt to gain an understanding of the underlying methodologies that produced the resulting American Indian Census Roll data. Currently available publications have tended, and understandably so, to overgeneralize the protocol as well as many of the implementation issues faced by the data collection project during its more than half-century of existence. The BIA provided a great deal of instruction to the BIA agents expected to produce the completed forms using a variety of methods i.e., circulars and directives, question by question instructions that appeared in memos or on the back of the census form, and instructions printed on the front of the form. I examine how these individual sources as well as relationships between them may have influenced the resulting census data itself. Such investigations are important for helping to interpret the information recorded on the censuses, and currently much of that methodology has not yet been digitized for internet use.